Why is my Opinel folding knife sometime difficult to open?

Humidity, atmospheric condition and the wood used for the handle can all affect the folding mechanism of your Opinel. As wood contracts and expands due to humidity it will hold the blade tighter or looser, this is why the function of your Opinel is not always consistent. If your knife is hard to open due to the above keep it in a cool dry place for a couple of days to give the wood a chance to dry. Some people will place the knife in a ziplock bag with a little uncooked rice overnight. The dry rice will "pull" the moisture out of the wood fairly quickly. See "Smoother opening of blade" to learn how to open a seized or hard to open blade.

How should I take care of my Opinel knife?

Avoid leaving it in damp environments for too long. Grease the metal parts regularly. Dry the blade using a dry cloth after each use.

My Opinel folding knife's blade is loose, why is that?

Same reasons as above cause your blade to be loose. If your blade is very loose you must try to bring some humidity back to the wood. Simply leave your knife in a very humid area for a couple of days and the wood will expand again and contract the blade area under the ring mechanism. Please do not immerse you knife in water.

How do you sharpen an Opinel knife?

Use a Diamond Whetstone or other fine-grain natural stone on a dry, degreased blade. As if you wanted to cut the stone, move the blade from the base towards the tip, at an angle of 18/20 degrees. A wide angle will thicken the cutting edge: it will be more resistant but less sharp. A small angle will thin the cutting edge: it will be less resistant but sharper. A burr forms on the opposite side of the blade. Remove this by passing this side over the stone, without pressing. To finish off, pass both sides over the stone, twice.

Can I put my Opinel in the dishwasher ?

Folding knives are not designed to be washed in the dishwasher. You can wash them by hand, being careful never to leave them soaking in the water and to dry and grease them properly afterwards. Fixed-blade kitchen knives with stainless steel blades and wood handle are dishwasher "friendly". In other words, you can place them in the dishwasher from time to time but don't make it a habit as eventually something unpleasant may happen. It is always best to wash Opinel knives by hand. The Intempora kitchen knives are designed to be washed with home or industrial dishwashers.

My knife's safety ring came off the handle, why did this happened and how do I place the ring back?

A safety ring can, from time to time get disconnected from the handle. This happens when one attempt to pull the blade out of the handle when the ring is in the locked position.

How to place the safety ring back: Place the ring on a hard surface with the blade side of the ring facing down. With the knife closed: Insert the metal side of the handle back in the ring making sure that the opening on the ring lines up with the closed blade. Firmly push on the back of the handle.

What is the difference between a carbon blade and a stainless steel blade?

The carbon blade has an unparalleled cutting quality and sharpens very easily. However, it must be regularly greased and dried after each use to prevent the formation of rust. A stainless steel blade will not rust. The stainless steel used to manufacture Opinel blades is12c27 Sandvik Swedish steel. 12c27 steel is consider by most to be the best Stainless on the market.

What is the "Crowned Hand" stamp?

In 1565 King Charles IX of France had ordered every master knife-maker to place an emblem on his products to guarantee their origin and quality. “In order to prevent counterfeits, the stamps had to be registered in a ‘safe place’, in the Police Lieutenant’s registry for Paris at the guild headquarters or the home of the oldest Master or Juror for knife-making centers. They had to be stamped on a slab of copper, lead or silver, as proof of registration and in order to keep an imprint in the event of dispute”. Respecting this tradition, Joseph Opinel chose as his emblem "The Crowned Hand”. This right hand, known as a hand raised in blessing, with three fingers straight and two fingers folded, figures on the coat of arms of the town of Saint-Jean-de-Maurienne. "A silver hand raised in blessing, on an azure background, clad in the same". Since the 6th century, the cathedral has housed a shrine where the faithful may worship, containing three fingers from the hand of Saint John the Baptist, brought back from Alexandria in Egypt by a young girl from Maurienne, named Thecla. The crown placed above the hand recalls the fact that the Savoie region was once a Duchy.

Where does the wood used for the Opinel knives' handles come from?

95% of the wood used comes from France. For further information see "The woods"

How should I take care of my Opinel knife?

The blade unfolds easily thanks to its nail groove. However, those practiced in the art can tap the heel of the handle hard on a table once and the blade will come out of the slit slightly.

Note: Please make sure the the safety ring is not on the locked position before you attempt to perform the above. 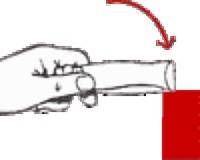 What is a Opinel Slim knife?

The blade & handle of the slim models are very different from the "Classic" Opinel models. The handle is tapered to a point for a comfortable fit. The blade is flexible like a "fillet" knife, this knife is not recommended for heavy duty usage. If you like the shape of the handle but need a stiff blade you will like the No 8 Garden knife.

I noticed that the beechwood of the Opinel Carbon and Stainless steel models looks different, is it the same wood?

Yes, we use the same beechwood for both series. However, the carbon models have a stained varnished handle and the Stainless-steel models have a natural clear stain.

How do you pronounce Opinel?

So many people called and asked this question that we felt the need to add it to our FAQs. Opinel is pronounced: [oh-peen-el].

What type of metal does Opinel use to make blades?

Although most Opinel blades are made of Stainless steel (Sandvik 12C27 modified) a few models are made of Carbon steel (XC90).

Why and when did Opinel stop offering the No 1 & 11 models?

Why does Opinel do not offer a wider range of carbon blade models, why just beechwood handle?

Several reasons are at play here. Some woods like olive wood for example contain oils that are very corrosive and simply would deteriorate a carbon blade regardless if you take care of it or not. The other and probably most understandable reason is that many of us would not know how to take care of a carbon blade or even realize/know what it is. In the grand scheme of things, expanding the selection of carbon blade models would be detrimental to the brand and customer experience as it would simply create unavoidable quality issues.

The blade of my Opinel is not level with the handle, it appears that the knife does not open fully. Is this normal?

Yes! The Opinel folding knife was designed that way. When open, the tip of the blade will be approximately level with the center of the ferrule's rivet. In addition, the ferrule (under the safety ring) will protrude around 1/16 inch out of the wood to prevent the back of the blade (and the pressure of the cut) from pressing against the wood handle. This is not a defect, it's simply a very clever design created by Joseph Opinel 128+ years ago....

In an effort to make our products and services as inclusive as possible, we are currently taking steps to improve the overall user experience of our website to bring up to standard with WCAG 2.1 guidelines. We are aware that images and buttons around the website may be lacking alternative text which assists screen readers for the visually impaired. We are actively updating the websites images and elements to assist users navigating opinel-usa.com.

For help placing an order

If you would like assistance placing an order on opinel-usa.com, or see additional information about our product. Our team of customer service representatives can be reached the following ways.

Customer service representatives generally respond to emails within 48 business hours. Phone calls are regularly answered between the hours of 9:00 a.m. and 5:00 p.m. MST.